Cannabidoil (CBD) has emerged in recent years as an alternative medicine for hard-to-treat illnesses like epilepsy, with the Food and Drug Administration (FDA) approving cannabis-derived medications, like Epidiolex. Studies have also demonstrated cannabis as a possible supplemental treatment in cancer patients, though researchers caution there have been no definitive conclusions.

Those two trends influenced a new study, published in the FASEB Journal, that found CBD as an effective therapy in a rare form of intractable brain cancer called glioblastoma. A highly deadly disease with low survival rates, glioblastoma affects both humans and dogs. Once discovered, it spreads rapidly through the brain and proves difficult to slow down. This study, scheduled to be presented at medical conference canceled due to the coronavirus pandemic, provides a possible improvement in fighting glioblastoma.

“Further research and treatment options are urgently needed for patients afflicted by brain cancer,” Chase Gross, a student at Colorado State University’s Doctor of Veterinary Medicine/Master of Science program, said in a statement. “Our work shows that CBD has the potential to provide an effective, synergistic glioblastoma therapy option and that it should continue to be vigorously studied.”

Gross, alongside fellow CSU researchers, exposed human and canine glioblastoma cancer cells to variations of CBD. One test included a 100% pure CBD isolate while another used a CBD extract that included other natural cannabinoids, such as THC and CBG. Both versions of CBD proved successful in slowing the cancer’s overall cell growth and inducing apoptosis, or cell death. 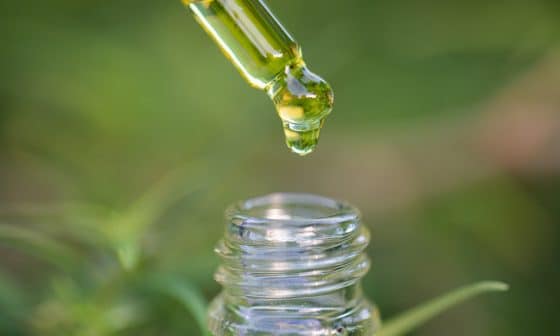 Researchers noted that the difference in anti-cancer properties between CBD isolate and CBD extract were negligible. They also documented how CBD caused apoptosis by enlarging the intracellular vesicles in the cancel cell membranes, which eventually began to bulge and break down.

Other studies have seen apoptosis in cancer cells, but scientists remain conflicted about how this process works. The CSU researchers suggested the nature of CBD’s anti-cancer properties involves the cannabinoid’s ability to target mitochondria, otherwise known as a cell’s energy station. CBD causes mitochondria to malfunction, the researchers believe, and eventually induce cell death. They researched this conclusion because their experiment showed CBD-treated cells had significantly lower mitochondria activity levels than normal.

“CBD has been zealously studied in cells for its anticancer properties over the last decade,” Gross added. “Our study helps complete the in vitro puzzle, allowing us to move forward in studying CBD’s effects on glioblastoma in a clinical setting using live animal models. This could lead to new treatments that would help both people and dogs that have this very serious cancer.”