Marijuana Has Been Deemed ‘Essential’ — But Essential for Whom?

As the coronavirus spread across the country in March, and stay-at-home orders began to go into effect, every state with a regulated cannabis system allowed weed sales to continue in some form, deeming medical-marijuana businesses essential during the pandemic, along with groceries and pharmacies. This, The New York Times declared, was “official recognition that for some Americans, cannabis is as necessary as milk and bread.”

This is a triumph for marijuana advocates. However, the patchwork of emergency orders during coronavirus has been confusing and difficult to navigate for recreational, or adult-use, cannabis businesses, projected to hit $12 billion in retail sales in the U.S. this year. Massachusetts Gov. Charlie Barker issued an order allowing medical-marijuana dispensaries to stay open, but halted recreational sales. In Colorado, recreational pot shops are limited to curbside pickup, while medical dispensaries can stay open. In Nevada, adult-use sales are only allowed through home delivery. It’s tough to keep track, since laws vary widely from state to state.

Despite the widespread acceptance of medicinal marijuana, some business owners are pushing back against the distinction between medical and recreational. The distinction can be frustrating, since all cannabis products are derived from the same plant — it’s simply the purpose of using it that differs. Some people smoke a joint to get high. Others depend on it as prescription medicine. Yet for countless others, their reason for use falls somewhere in between.

Anyone over the age of 21 can buy recreational cannabis in 11 states that have legalized adult-use. In the 33 states with medical marijuana (MMJ) laws, though, there’s considerable variation on what conditions qualify a patient to receive a doctor’s recommendation. Some states, like Delaware, allow for MMJ use to treat autism and PTSD, while others, including New York and New Jersey, have a much more limited list of approved conditions. Fourteen states restrict the level of THC, the psychoactive component in cannabis, while acknowledging the efficacy of cannabidiol (CBD) to treat seizure disorders, particularly in children. The National Organization for the Reform of Marijuana Laws (NORML) updates its site frequently to keep up.

The distinction gets even more complicated when you take into account that plenty of people shop on the recreational market for medical cannabis, says Morgan Fox, media-relations director for the National Cannabis Industry Association. “Whether a patient’s registration gets too expensive, or they don’t have one of the qualifying conditions in their state — or maybe they forgot and didn’t get their medical card renewed,” Fox says, “a lot of people depend on the adult-use system to get their medicine.”

Additionally, Fox says, there’s the concern that denying consumers access to legal weed during the pandemic will push them to buy from the illicit market: “There are untested, unregulated products that are potentially dangerous, and they could be obtained in an unsafe manner.” Buying from a licensed cannabis shop ensures products are safer for consumers — state laws mandate accurate labeling with dosage and lab-tested levels of THC and CBD, residual pesticides, mold, mildew, and other unwanted contaminants. 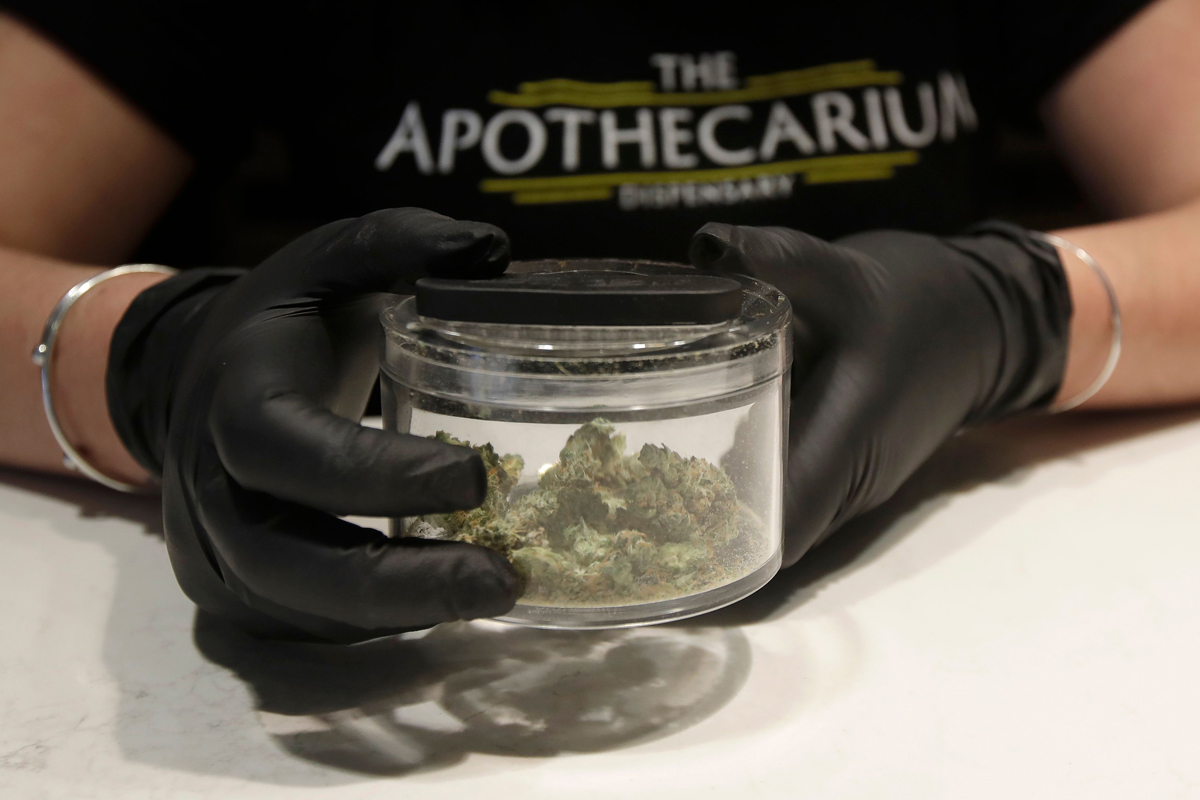 Despite COVID-19, data shows that consumers continue to shop for weed, with edibles capturing a bigger market share than usual — smoking may have dropped due to the threat of coronavirus respiratory infections. Cannabis sales spiked at the outset of the pandemic when people rushed to stock up, says Liz Connors, director of analytics for cannabis data intelligence company Headset. “When I look at the March data for Washington state, it looks like there were two 4/20s,” says Connors, referring to the unofficial weed lovers’ holiday. “Just before the shelter-in-place order, we had days that were over a 100 percent increase in sales from the prior day.” Now, she says, most markets have stabilized, and are ringing in just under average sales.

Multistate cannabis company Viola has operations in Colorado, Oregon, Michigan, and California, and plans to expand into three more states by the end of 2020. Viola’s Chief Marketing Officer Ericka Pittman saw the March spike in sales as a natural response to the pandemic, dubbing it the “toilet-paper factor”: “People get nervous, so they overstock. As we start to adjust, they’re realizing dispensaries are still open. They are recalibrating on how and when they want to shop, and it’s starting to normalize.”

Fox concurs. “Ensuring continued access to legal cannabis has cut down on panic buying and stockpiling,” he says. “We’re in a situation where our health care systems are already overtaxed. It doesn’t make any sense to interrupt people’s health care during the midst of a crisis like this.”

Fox also points out that the cannabis industry faces more financial burdens than almost every other industry due to heavy taxation and strict regulations, and no access to federal funding. State-legal marijuana businesses were mostly shut out from receiving grants or loans through the $2 trillion federal stimulus package. He’s hopeful that the legal-weed industry will survive, and evolve, by working with state officials to provide safe, uninterrupted access for cannabis consumers. “It puts us on a really good footing for potential progress, as soon as things start to get normalized,” he says.

No matter how you choose to use it, cannabis has medical applications that even recreational users benefit from, says Andrew DeAngelo, cannabis-industry consultant and co-founder of the Harborside dispensary chain in California. “It’s good for things like introspection, reflection, meditation, prayer — any of those things that we all do to help ourselves when we’re in a situation like we are in today. It’s self-care.” And, he says, people need access to legal weed now more than ever. “We’re all suffering, and we are all patients right now.”