‘It’s about being well’: Cannabis shops thrive as ‘essential businesses’ in coronavirus pandemic

As the global death toll continues to rise from the coronavirus pandemic and anxiety for Americans escalates along with the unemployment rate, operators of cannabis dispensaries across the country have reported that business is booming.

Designated by many cities as «essential businesses,» legal weed purveyors from Oakland, California, to Denver have been reporting long lines of customers outside their shops similar to those recently seen at entrances to grocery stores and pharmacies.

«We’ve had both lines of cars and lines of people wrapping around our buildings,» Steve DeAngelo, co-founder and chairman emeritus of Harborside dispensaries in California, told ABC News. «It’s not about getting high, it’s about being well.»

Early numbers from the nationwide cannabis data intelligence firm Headset showed that legal marijuana sales in California skyrocketed 159% on Monday compared with the same day in 2019.

Monday was the day before San Francisco officials issued a citywide shelter-in-place edict amid measures already taken across the state to blunt the spread of the virus — shuttering bars, reducing restaurants to takeout orders and limiting crowds to the sizes of knitting circles. 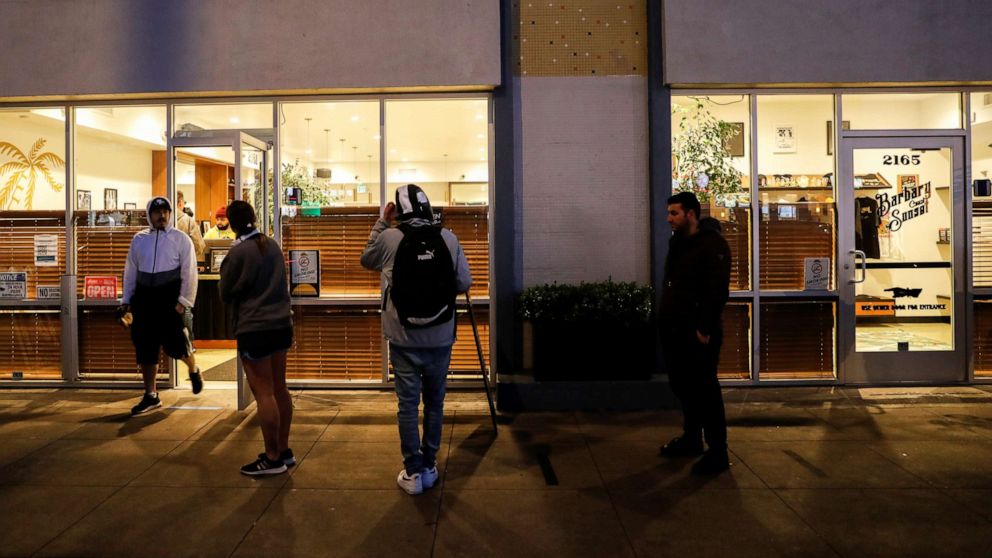 People stand in line outside the Barbary Coast Sunset Cannabis Dispensary prior to the citywide shelter in place order amid the novel coronavirus (COVID-19) outbreak in San Francisco, March 16, 2020.

People stand in line outside the Barbary Coast Sunset Cannabis Dispensary prior to the citywide shelter in place order amid the novel coronavirus (COVID-19) outbreak in San Francisco, March 16, 2020.Stephen Lam/Reuters

Eliot Dobris, spokesperson for The Apothecarium dispensaries in San Francisco, said that on Monday the company’s three shops saw their biggest day of business since the first day of legal recreational sales in January 2018.

«People were buying in larger quantities, not certain when they would be able to come back and make another purchase,» Dobris told ABC News.

San Francisco officials initially declined to place cannabis dispensaries on the «exceptions» list of essential businesses allowed to remain open during the public health crisis as so many others were forced to close when the lockdown took effect at 12:01 a.m. Tuesday.

But as the clamor for cannabis grew, the city had a change of heart.

«The Department of Health today clarified that since cannabis has medical use, dispensaries will be allowed to operate as essential businesses just like pharmacies are allowed to do,» San Francisco Mayor London Breed announced at a news conference Tuesday night.

In an interview with ABC News on Wednesday, Breed said there’s no doubt the pandemic is having a «significant impact on our economy.»

«So it’s important that we think about creative things we can do for the short term in order to get us all through this,» Breed added.

Dobris said The Apothecarium’s three shops in San Francisco are planning to reopen on Thursday, adding that staff members have been scrambling to make adjustments to operate during the crisis.

«We’re going to be shifting to online orders for pick-up only. We will no longer be doing consultations in stores,» Dobris told ABC News. «We’re also assigning employees to be constantly sanitizing in the stores, and other employees will be making sure that guests and team members are observing social distancing. We’ll be monitoring the line outside for social distancing as well.» 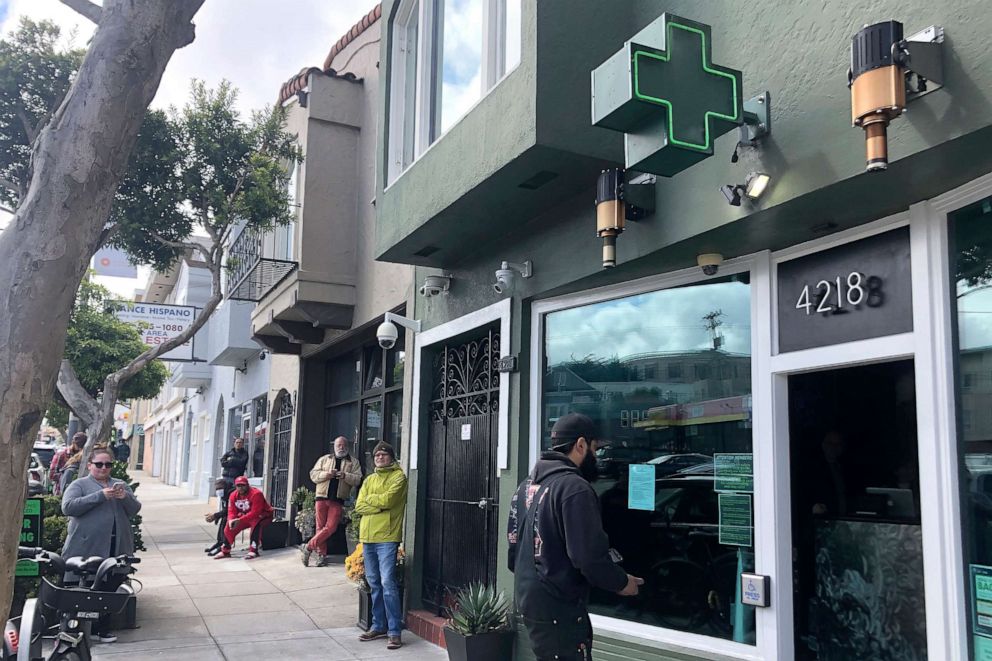 Legal marijuana dispensaries have also seen sales spikes since Friday in Colorado, Oregon, Alaska, Nevada and Washington, according to the Headset stats. In Washington state, sales jumped 33% on Sunday compared with a week earlier, with purchases of more than $50 increasing from 16% to 21%.

«We also know that there’s a great number of people with conditions like anxiety who medicate those conditions with cannabis. And a lot of folks are going to be suffering heightened degrees of anxiety and other types of emotional disruption given everything that’s going on,» DeAngelo told ABC News.

DeAngelo said that in Alameda and Santa Clara counties in the Bay Area, where Harborside operates three shops, dispensaries were designated «essential businesses» from the get-go of the crisis.

«Unlike most other products in our society, especially in California, there is an extremely robust underground market for cannabis. If the dispensaries in California were closed, that slack would immediately be taken up by unlicensed delivery services,» DeAngelo said, adding that his company operates its own 47-acre cannabis farm in Salinas, California. «Those unlicensed delivery services do not test their cannabis, they don’t know the provenance of that cannabis, they don’t know whose been breathing on it, who’s been handling it.»

He said Harborside’s Desert Hot Springs dispensary in the Coachella Valley of Southern California also was seeing brisk business, adding that the shop’s drive-thru window has been inundated.

«It’s one of only two drive-thrus that exist in the state now,» DeAngelo added. «It’s the safest way to buy cannabis in the Coachella Valley right now.»

«Customers can place their orders on the phone, and in a reasonable period of time somebody will come out to the car. That person will be wearing protective gear. They will have been maintaining appropriate sanitary procedures and will arrange the exchange of that cannabis in the maximally safe method possible for both parties,» DeAngelo said.

«Much like Amazon Fresh is out of produce now because everybody is buying online, we are seeing an uptick in interest in our products. It’s looking as if it could be quite substantial,» Lonsdale told ABC News. «People are resorting to going online to buy things rather than going out in public.»