Can cannabis help diabetics actually control their disease? The evidence here is not clear and is very preliminary.

Diabetes is truly an American epidemic. The U.S. Centers for Disease Control and Prevention estimates that over 30 million people in the United States — or around 5-10% of the population — live with Diabetes Mellitus, which is often simply referred to as diabetes.

Those with diabetes have trouble storing and using the sugars in their diets. Sometimes this is due to loss of production of Insulin, a hormone that helps our bodies store sugar for later use. This is called Type 1 diabetes. More common is Type 2 diabetes where, largely due to being overweight, people develop resistance to normal Insulin levels.

In either type, this leads to hyperglycemia, or high blood sugar. Uncontrolled diabetes can cause blindness, kidney failure, and severe nerve damage. Diabetes can also put one at a higher risk of having a heart attack or stroke.

Some common symptoms of diabetes include unexplained weight loss in conjunction with excessive thirst, increased appetite, and increased urination. In extreme cases people can experience fatigue, confusion, loss of consciousness, and even death. If you suspect you may have diabetes, please see your doctor immediately.

Diabetes is typically managed with a range of medications, some of which are oral, like Metformin, and others must be injected, like Insulin. Changes to lifestyle and diet are crucial for controlling this disease. 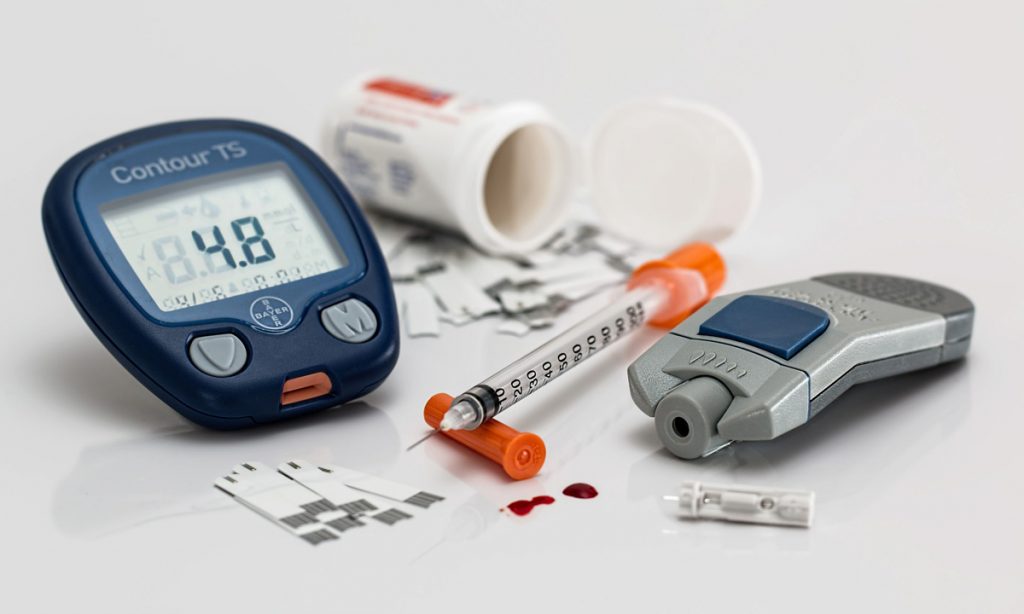 Some diabetics are now turning to medical marijuana as a way to complement their current treatment plan. Those who are interested in using cannabis to aid in treating their diabetes should not cease use of their conventional medications. Since there’s nothing about cannabis that would make you think it should help diabetes, let’s examine what we know about it.

Can Cannabis Help Me Manage My Diabetes?

As with most diseases, there is the underlying disease and then there are the symptoms that come from the disease. Diabetes is similar. Can cannabis help diabetics actually control their disease? The evidence here is not clear and is very preliminary.

Those who have diabetes or are prediabetic may find that cannabis use helps reduce glucose resistance. One large 2012 study found that those who regularly use cannabis were less likely to have diabetes than those who did not use cannabis. Other research has found that cannabis use is associated with lower fasting-glucose levels — according to this study, those who used cannabis had 16% lower fasting insulin levels than those who abstained from cannabis. Does this mean diabetics should be using cannabis to treat their illness? Probably not, yet.

Cannabis may offer those living with diabetes exceptional relief from neuropathic pain. Although limited research has been done on the connection between cannabis use and neuropathic pain as a result of diabetes, studies have shown the powerful therapeutic effects of medical marijuana on nerve pain caused by a number of other conditions: this 2018 study, for instance, found that cannabis may be effective in reducing neuropathic pain, and other studies have continuously backed up these findings.

Please note that those who have developed gestational diabetes, a third type of diabetes, while pregnant should not use medical marijuana as there is not yet enough evidence to suggest that cannabis use while pregnant or breastfeeding is safe.

What is the Difference Between CBD and THC?

CBD and THC are both cannabinoids, or medicines found in cannabis. THC, also known as tetrahydrocannabinol, is generally considered to be responsible for most of the therapeutic effects of medical cannabis, including pain and nausea relief.

Although CBD, or cannabidiol, has been shown to be effective in treating children with rare seizure disorders, those who are trying to manage other conditions like diabetes are advised to avoid CBD-infused oils and other products. Not only can CBD interfere with many other common prescription medications, but it also has only been shown to be effective at treating pain and inflammation in mice, and at extremely high doses — think 600-1200mg , or $50-100, a day.

Using THC and Other Cannabinoids to Manage Diabetes

Ultimately, those with diabetes may experience therapeutic benefits from medical marijuana containing THC.

In addition to THC, another cannabinoid called THC-V is generating some scientific interest. Easily confused with THC, tetrahydrocannabivarin or THC-V has been shown to reduce insulin sensitivity in mice. Another 2016 study conducted on humans found that when administered to patients with diabetes, THC-V was more effective in decreasing fasting glucose levels than a placebo. More research on THC-V is necessary to solidify the value and safety of this cannabinoid for the treatment of diabetes.

If you are interested in using THC, THC-V, or any other derivative of medical marijuana in conjunction with your current treatment plan, it is highly recommended to consider speaking with a doctor who can best assist you in using cannabis to help manage your diabetes.