Call it the battle of weed vs. tweed.

The contest pitted Missouri’s medical marijuana industry against academics (famous for woolen sports jackets with elbow patches) at the University of Missouri-Columbia. And, as it turned out, the pot people beat the pencil-necks in predicting the bumper crop of patients certified to participate in Missouri’s new medical marijuana program.

It all began in November 2018, when voters overwhelmingly made Missouri the 33rd state, plus the District of Columbia, to legalize medical marijuana. Sixty-six percent of those who turned out voted in favor of the constitutional amendment, often referred to as Amendment 2, which is how it appeared on the ballot.

After the vote, the Missouri Department of Health and Senior Services (DHSS) asked a team headed by MU economics professor Joe Haslag to estimate the size of the potential market. Put simply, the MU team whiffed badly (with one caveat) in the report it issued in the spring.

It now appears that, according to some estimates, the state could be on track to issue approximately 70,000 medical I.D. cards in the program’s first year — nearly four times the number predicted by the Haslag study. Optimistic observers predict the Missouri program could even hit 150,000 patients by the third year.

Shot in the Dark

So, how did the abacus-clickers get it so wrong?

Haslag argued that his team was hampered by a lack of solid figures gathered by medical-marijuana states. (Twelve of those jurisdictions have gone on to approve recreational pot.)

“I was surprised at the paucity of the data,” Haslag said.

Researchers found that data from 19 states was sufficient enough to estimate the number of card holders in the first three years in Missouri, with a high-end calculation of 26,404 by 2022.

Haslag ultimately relied heavily on four states that the report said had the most complete data: Washington, Arizona, Massachusetts and Colorado. 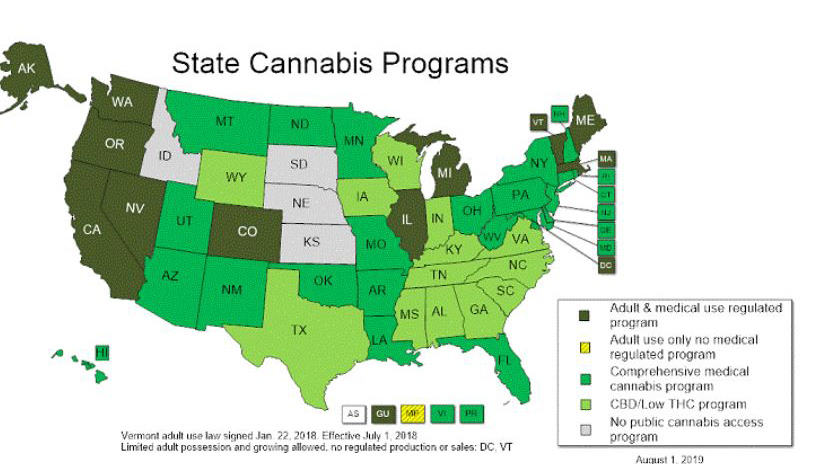 Industry representatives, who had worked with a former state budget official to come up with their own projections, pounced on Haslag’s figures. Medical marijuana industry leaders include Jack Cardetti and Dan Viets, who were instrumental in the Amendment 2 campaign.

They argued that Haslag erred by basing his projections on a group of programs that are not necessarily akin to Missouri’s program.

One key difference among programs is whether they include chronic pain as a qualifying condition, which opens the program up to more potential participants (as Haslag wholeheartedly agrees). Another differentiator is the speed at which the state gets the program up and running.

Missouri includes chronic pain as a qualifying condition, and marijuana industry representatives give DHSS high marks for meeting deadlines and striving to get the program started in 2020.

Marijuana industry representatives said a more apples-to-apples approach would have compared Missouri to chronic-pain states like Colorado or Oregon.

Oregon and Colorado have since approved recreational marijuana, which can dramatically reduce participation on the medical side. But data from the two states indicated their medical marijuana programs did at one time enroll more than 2% of the state population.

In Colorado, it took a decade to hit that high water mark. Oregon registered 2.6% of its population enrolled in January 2015, seven years after approving medical marijuana. (Earlier data were not available on the program website.)

Haslag never understood how Amendment 2 supporters could argue that Missouri would hit the 2.5% to 3% percent threshold in just three years. He chalked it up to industry folks having a vested interest in predicting a booming market.

But what Haslag might have missed is the growing public acceptance and enthusiasm that has built over the years as medical marijuana has become more commonplace in the country.

“States that implemented a medical marijuana program years ago didn’t benefit from what is now overwhelming support from the general public,” Cardetti said in an email.

Cardetti pointed to Oklahoma, which enrolled its 200,000 medical marijuana patient on Oct. 1, a little more than a year after voters approved the program in June 2018.

The popularity of Missouri’s program extends beyond patients. The state received more than 2,100 applications for the 338 total licenses it expects to issue for growers, manufacturers and retailers. Approvals could start coming as early as this week.

Along with riding the wave of public opinion, Amendment 2 drafters also had the benefit of learning from other state’s mistakes.

For instance, Viets said, they had heard of instances where an organ donation recipient had been turned away because of a positive drug test, even though the person was a certified medical marijuana patient.

The Missouri constitutional amendment expressly holds that no patient “shall be denied access to or priority for” an organ transplant based upon their use of medical marijuana.

One of the most important wrinkles of the amendment, Viets said, was the built-in funding mechanism that has allowed DHSS to get moving without waiting for a legislative appropriation.

Its pre-filing language was meant to give the department enough fee revenue to begin building and administering the program this year — with some fees ranging as high $10,000 per application.

As of August, the department had received more than $13 million in fee revenue. The amendment requires that any excess funds collected by department be transferred into a newly established Missouri Veterans Health and Care Fund.

Even Haslag’s critics credit him with fine figuring when it came to calculating the amount of marijuana each patient might consume in a year. By Year 3, he said, Missouri patients could average about 9 ounces a year.

Haslag spent a lot of time in the report warning about how an overabundance of medical marijuana — where growers turned out more product than the patient population could consume — could find its way to the black market for recreational users.

That might be less likely now that Missouri patients are flocking to the program, but Haslag still warned of the “moral hazard” at play that could induce a legal grower to dump excess product into the illegal market.

“That is the struggle that needs to be the focal point for all of this,” he said.

The program has a seed-to-sale tracking system that is meant to ensure that medical marijuana stays in the legal market.

It is within that context that Haslag noted the report’s discussion about the Arizona experience, the caveat that he said the report’s critics overlook.

The report noted that, if Missouri were to mimic Arizona’s better-than-expected performance, Missouri could wind up with nearly 62,000 patients in its first year — closer to what it appears the actual number will be. Yet the report’s estimates for the second and third years in Missouri, based upon the Arizona experience, would still be far short of where Missouri might actually be by 2022.

Chronic pain makes up a huge percentage of the diagnoses in Arizona, Haslag said.

On Jan. 1, Illinois will become the latest state to sell pot for legal recreational use, a big development for supporters like Kelvin McCabe, who is on the board of the Illinois chapter of the National Organization for the Reform of Marijuana Laws.

He has watched how Illinois has struggled to implement its medical marijuana program since 2014, starting with a very restrictive program that took around a couple years to get to 5,000 patients. Since then, the state has loosened requirements, and it now has approximately 94,000 licensed patients.

When Illinois legalized medical marijuana, McCabe said there were all sorts of worries about automobile accidents involving impaired drivers, retailers attracting an unsavory crowd, and drug sales out the back door to black-market dealers.

None of that has happened, he said.

So apocalyptic theories about pot seem just as difficult to predict as economic forecasts — indicative, perhaps, of societal misunderstandings of marijuana.