Cannabis consumers report that it aids in alleviating symptoms of cramping, abdominal pain, nausea, and poor appetite associated with IBD.

Cannabis consumers report that it aids in alleviating symptoms of cramping, abdominal pain, nausea, and poor appetite associated with IBD.

Cannabis has been utilized in the treatment of gastrointestinal issues for hundreds, if not thousands of years. Even before the discovery of the endocannabinoid system in the human body, the use of cannabis has been shown to alleviate symptoms of gastric distress.1 Could cannabis play a role in improving quality of life and providing symptomatic relief of inflammatory bowel disease?

Inflammatory bowel disease (IBD) is a challenging, long-term disorder typically characterized by chronic inflammation of the digestive tract. IBD is further subdivided into ulcerative colitis and Crohn’s disease. Ulcerative colitis causes inflammation and sores within the lining of the large intestine and rectum, while Crohn’s disease is identified by a more generalized, deeper inflammation of the entire digestive system. Both classifications may involve weight loss, abdominal pain, diarrhea, and fatigue. In some cases, IBD can lead to life-threatening complications.2 Additionally in younger patients, delays in puberty and growth failure may occur.3 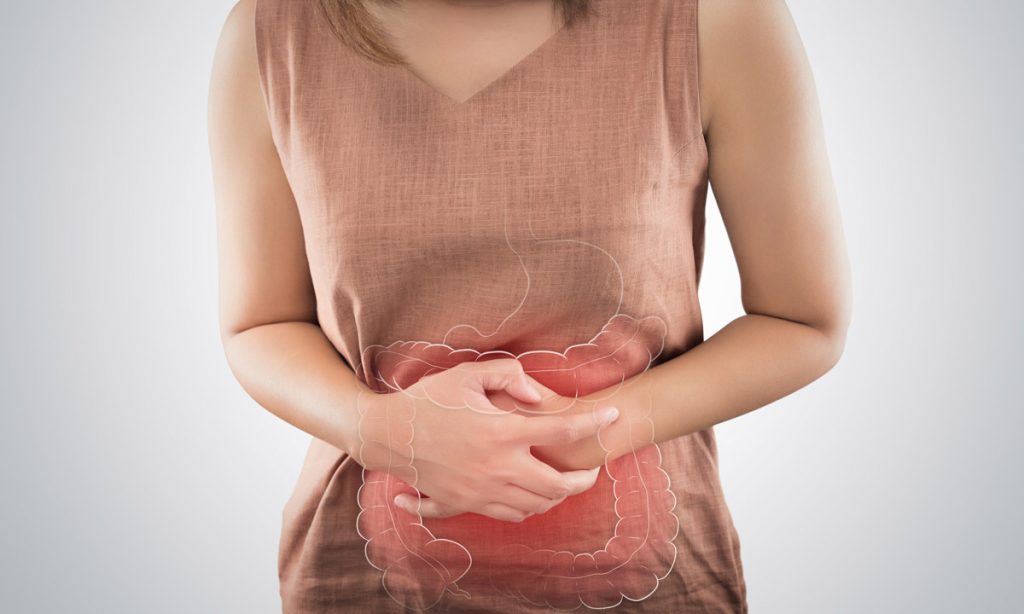 The cause of IBD is not completely established, though it is likely that genetics coupled with a dysregulated immune system may result in an inappropriate inflammatory response in the gastrointestinal tract. Current pharmacologic interventions focus on immune suppression and may include antibiotics, corticosteroids, aminosalicylates, and biological therapy. In some cases, surgical intervention may be necessary.4

Using animal and human cell lines in experiments, it has been theorized that a lack of naturally produced endocannabinoids in some people may result in the body being unable to control the inflammatory process in the gastrointestinal tract. Consumers of cannabis report that it aids in alleviating symptoms of cramping, abdominal pain, nausea, and poor appetite. It is believed that supplementing an under-producing endocannabinoid system results in improved quality of life and reduction in symptoms.5

In a study comparing tetrahydrocannabinol (THC), cannabidiol (CBD), and sulfasalazine in the treatment of intestinal inflammation in rodents, it was discovered that the most effective therapy was a combination of low dose THC with CBD. The research is promising for developing a safer, more effective treatment for IBD, especially due to a lack of psychoactive effects when using CBD in combination.6

In another study, scientists used CBD without THC to determine the efficacy of inflammation reduction. They discovered that if CBD was given before inducing a flare up, it prevented inflammation from occurring. Additionally, if a patient was suffering from an active flare-up, administration of CBD reduced inflammation.7

There is growing evidence to suggest that more specific cannabinoids such as cannabigerol and THCa may be especially useful in alleviating IBD symptoms. It is important to note that THCa needs to be consumed orally in order to derive benefit from it.1

Additionally, terpenes such as beta-caryophyllene and myrcene have proven to be beneficial for abdominal pain relief. Specific strains that contain the previously mentioned cannabinoids and terpenes include Sour Diesel, Tangie, Cookies, and Durban are the most commonly cited.1

While further research is integral to clearly identifying the best possible treatments for IBD, it is at least encouraging to see cannabis be a part of the conversation moving forward.

6. Jamontt JM et al. The effects of delta-9-tetrahydrocannabinol and cannabidiol alone and in combination on damage, inflammation and in vitro motility disturbances in rat colitis. British Journal of Pharmacology. 2011;160:712-23.