Adderall and weed: Everything you need to know

Before we get into the effects of adderall and weed combined, we should first get acquainted with the colorful history of Adderall.

Unlike cannabis and hemp which have been around for a long time and played a pretty important role in human history, the story of amphetamines is relatively brief and packed with controversy.

It all started with Lazar Edeleanu, a Romanian chemist who first synthesized amphetamine in 1887.

No apparent uses were found, and the scientific world soon deemed this substance pharmaceutically worthless. Several decades later it was re-discovered (and patented) by an American chemist named Gordon Alles.

Alles was trying to create an alternative to ephedrine, which was a really successful decongestant/bronchodilator drug at the time, used primarily for asthma, common colds and allergies.

In 1929, Alles tried his new amphetamine compound for the first time. During this era it wasn’t unusual for researchers to experiment on themselves, and he reported a climb in blood pressure, slight heart palpitations (irregular heartbeats) and a general sense of well-being.

He felt increasingly talkative and clever after the dose, and later that night had trouble falling asleep. These effects would later characterize an entire group of drugs, which he named amphetamines.

Even though amphetamine completely failed to match the medicinal effectiveness of ephedrine, Alles was certain that he was onto something, and soon partnered with a pharmaceutical firm called Smith, Kline and French (SKF), who fiercely marketed his euphoric stimulant.

In the years to come, several amphetamine-based formulations were hailed as wonder-drugs, and were used for conditions such as chronic pain, obesity, narcolepsy, low blood pressure and libido-related issues.

Amphetamines were also utilized by college students looking to increase their productivity, long-haul truckers trying to meet their deadlines, and even apathetic housewives wanting to escape their mundane reality.

The American troops were using Benzedrine (amphetamine). Twenty years later, during the Vietnam conflict, they consumed Dexedrine (dextroamphetamine), which is approximately twice as potent as Benzedrine. A 1971 report of the House Select Committee showed that their forces consumed 225 million tablets of mostly Dexedrine over the course of three years (1966-1969). 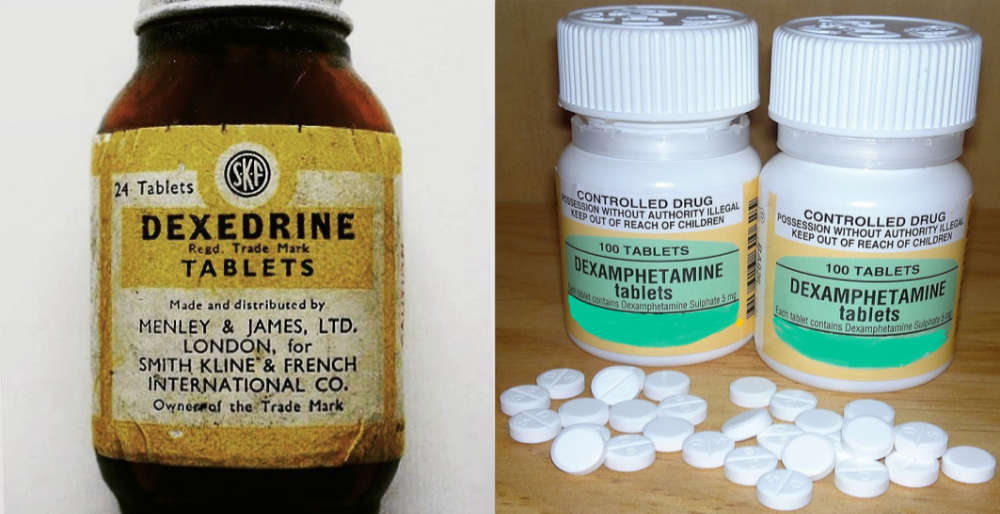 When the Nazis invaded France, Belgium and the Netherlands, they brought with them 35 million Pervitin pills, which were made with methamphetamine, a more severe chemical relative to amphetamine, popularized in the hit show Breaking Bad. 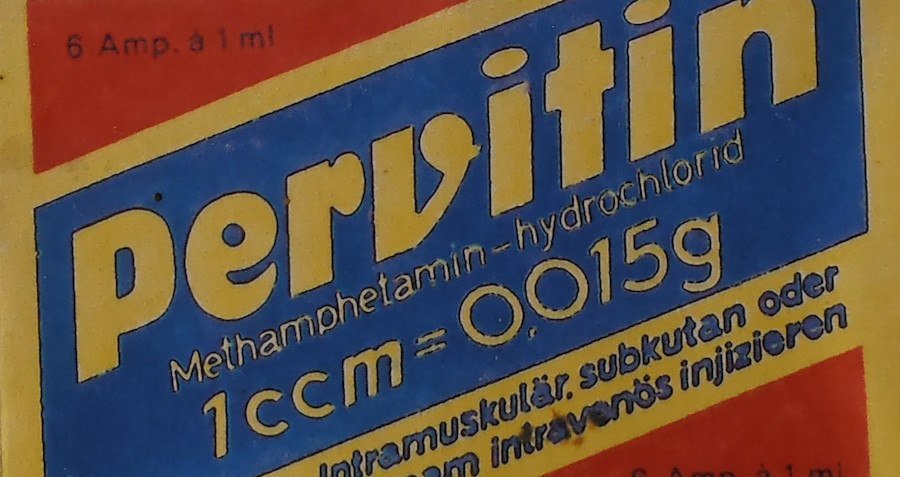 The Japanese troops used Philopon (also methamphetamine), with particularly high doses being given to kamikaze pilots to boost their suicidal dedication.

These compounds were also accepted by counterculture movements across America, starting with the 1950’s Beatniks, and later on the Hippies, who first coined the street name for amphetamine which stuck to this day, “speed”.

Amphetamine is mentioned in many popular songs, such as The Rolling Stones’ “Can’t you hear me knocking”, or Lou Reed’s “How do you think it feels”, etc. It was also the drug of choice of Andy Warhol and his contemporaries during the Factory years, and is considered a key factor in his severely deteriorated health, leading to his death after a routine gallbladder surgery.

In 1971, under the Controlled Substances Act, amphetamine was declared a Schedule II controlled substance, having a high potential for abuse and addiction, but with accepted medical benefits.

In the last two decades or so, amphetamines have resurfaced in medicine, and are mostly prescribed for ADD (attention-deficit disorder) and ADHD (attention deficit hyperactivity syndrome). Many of these amphetamine users with prescriptions are children, some of them as young as three years old.

Other conditions that qualify a patient for an Adderall prescription are narcolepsy, and several off-label uses (not approved by the FDA for that condition, but can be prescribed by the doctor), which include depression, anxiety and bipolar disorder.

What happens if you mix weed and Adderall?

The primary reason why people choose to recreationally consume these substances together is because cannabis allows a smoother “comedown”, once the effects of Adderall have already subdued.

On the other hand, people who take Adderall for actual medicinal reasons often consume cannabis in order to battle the side effects associated with this drug, which include the loss of appetite, nausea, sleep-related issues, stomach aches and anxiety.

If a user decides to consume both these substances simultaneously, the combined effects greatly vary from person to person.

Adderall and cannabis frequently cause an intense sensation of euphoria, and also cause our blood pressure and heart rate to rise. Mixing these substances isn’t recommended for anyone who suffers from a heart condition.

Just like with large quantities of THC, the combination of weed and Adderall can also trigger anxiousness and paranoia.

Some users have also experienced shortness of breath and issues with breathing, and we’ll additionally discuss this particular side effect in the continuation of the article.

What are the effects of mixing Adderall and weed?

The answer to this question depends on 3 factors:

The effects of Adderall correspond with the ingested quantity. If keeping in line with therapeutic doses (that were prescribed by your physician), the effects of this drug should be perceptually very subtle.

Medicinal users of Adderall mostly use this medication because of their lack of focus, and consume cannabis after the effects of Adderall have worn off, in order to battle the side effects (such as insomnia, nausea, appetite issues, stomach pains and anxiety).

The type of cannabis consumed also plays a vital role in a person’s experiences with these substances combined.

If a person uses a sedative Indica strain, this type of cannabis will most likely diminish the energizing and focusing effects of Adderall.

If he or she consumes a stimulating Sativa strain, this type of weed will add to the energizing impact of Adderall.

All in all, if you’re using this drug for ADHD, avoid consuming these substances combined, because the psychoactivity of THC will probably make you lose focus.

The third and final factor is time.

Many recreational users of Adderall (or amphetamine/speed, however you want to call it) get a kick out of consuming these substances at the same time, because it combines the stimulating effects of Adderall, and the relaxing qualities of cannabis.

This is the worst possible way of using them, as it frequently results in those negative side effects we already mentioned: anxiety and paranoia, a rise in blood pressure and heart rate, and sometimes even serious troubles with breathing and shortness of breath.

How do weed and Adderall impact brain chemistry?

The current scientific consensus tells us that people who suffer from ADHD have a dysfunctional dopamine release, which causes them to constantly seek out new stimulation, making it difficult to focus on anything for extended periods of time.

Adderall increases the amount of available dopamine, allowing the person to be less distracted and fixated on the task at hand.

On the other hand, the chemical impact of cannabis is also quite complex:

The chemical compounds unique to weed (cannabinoids) affect our endocannabinoid system, which is a vast network of cells within our body that have specialized cellular receptors.

Once affected by cannabinoids, these cells change the way they behave. Scientists figured out that the endocannabinoid system serves as a “balancing” system, performing subtle cellular changes.

So far the scientists have discovered two receptor types within the endocannabinoid system. The ones that affect our perception are CB1 receptors, located primarily in our brain.

Once “cannabinoid-contaminated” blood reaches specific regions of the brain, cannabinoids attach to the CB1 receptors, causing a wide range of chemical changes.

The psychoactivity associated with weed is mostly caused by THC, and one of the most important factors of being high is that our brain has shorter periods of rest in between thoughts.

You’re probably experienced the sensation where it seems that you can’t stop your thoughts, because they keep on evolving and going in new directions.

This happens because THC shortens the “break-time” of neurons, causing them to fire more rapidly.

This effect of cannabis has been closely associated with creativity, as it essentially changes the way our mind functions, which often leads to novel ideas and concepts.

Cannabinoids also influence the levels of dopamine and serotonin in our brain, making cannabis intoxication a generally pleasurable experience.

However, THC interferes with the conversion of short-term memories into long-term ones, which is why it’s often very difficult to remember that magnificent idea from the night before (tip: write it down!).

Why does it feel like I can’t breathe when I take Adderall and smoke weed?

This is a relatively frequent side effect of using Adderall and cannabis at the same time. Since there are no scientific studies that observed and analyzed these substances combined, it’s very difficult to determine how detrimental this effect really is.

What we do know is why this happens.

As previously mentioned, amphetamine increases dopamine and norepinephrine levels, and this activates our sympathetic nervous system, which dilates the vascular system and pumps the blood out of the periphery and into our vital organs, including the heart.

The increase in heart-rate and blood pressure is what makes it more difficult to breathe.

What’s interesting is that high levels of THC also increase the heart-rate and blood pressure, especially in the first couple of minutes after consumption.

When Adderall and high-THC cannabis are combined, this can definitely make breathing very difficult.

This is more than enough to freak anybody out, and can especially be frightening if you’re prone to anxiety.

In a nutshell, if this keeps on happening to you, it’s best to just stop using them together.

What do you call it when you take Adderall and smoke weed?

Using weed and Adderall at the same time is colloquially known as “Madderall”, a slang term that combines the words marijuana and Adderall.

The word marijauna is actually a Mexican slang term for cannabis, which was popularized by certain American papers during the 1930’s. The action had an end goal to alienate the cannabis plant from the American public, who were using liquid cannabis extracts for medicinal reasons, and weren’t familiar with smoking cannabis. Soon after the plant was made illegal.

If you’d like to know more on how cannabis was illegalized, check out this article.

Many individual cases prove that cannabis use after Adderall consumption can alleviate the negative side effects of this drug. However, we’ve pointed out situations when it would be wise to abstain from mixing Adderall and weed.

It’s important to know that Adderall is not a naive substance. Using it pretty much guarantees chemical dependency, even with therapeutic doses, and full-blown addiction is a very real danger for recreational users who consume this drug in larger quantities.

While it definitely offers great results for ADHD sufferers, consuming amphetamines from an early age doesn’t seem healthy or safe, especially when we consider the extremely shady past of these substances.

We should also have in mind that Adderall is a patented trademarked product, which means that only one pharmaceutical corporation has the right to manufacture and sell it.

Assessing the risks and benefits of Adderall requires a lot of knowledge on this substance. In the case of ADHD-diagnosed children, it’s very important to evaluate if consuming hazardous amphetamine-based medications is really worth the academic success.