Infusing marijuana with data: Cannabis industry vets aim to clear the haze in a booming industry

Cy Scott, Brian Wansolich, and Scott Vickers had just sold their popular cannabis directory Leafly to Privateer Holdings. As they plotted their next endeavor, one word kept coming up in almost every conversation: data.

The legal pot trade was starving for it. Brands were coming on the scene in droves. Investors were pouring in millions of dollars. And there were any number of ways to deliver pot to consumers — plant strains, oils, tinctures, vape pens, candies, sodas and more.

Yet hardly anyone knew, at least when it came to numbers, what consumers liked most.

“We didn’t really understand consumer behavior and market trends,” Scott said of the marketplace at the time. Brands, he said, were “throwing everything at the wall and seeing what might stick.”

Scott, Vickers and Wansolich set out to fix that. In 2015 they founded Headset, a Seattle-based cannabis analytics firm that tracks retail sales of hundreds of thousands of pot products — and billions of dollars in transactions — in real time.

Headset is part of a wave of new firms trying to bring the kinds of consumer metrics enjoyed by big brands such as Coca-Cola, Toyota and Nestle to cannabis.

The company’s customers can summon dashboards offering any number of metrics or combinations of data. Manufacturers use the information to decide whether to ramp up production on a suddenly hot-selling product or scale down on something that isn’t selling as expected. Retailers use it to learn whether they should stock more of a brand or switch to another.

Think of it this way: Nabisco doesn’t even consider launching a new Oreo flavor without reams of market data. Soon, if Headset and companies like it have their way, pot companies won’t market a new vape pen or tincture without similar numbers to back them up. 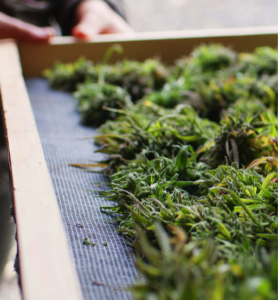 Headset is riding a wave of cannabis industry growth. The legal recreational pot business in the U.S. is expected to reach $7 billion this year, a 28 percent increase over 2018. Eleven U.S. states plus Washington D.C. allow for the recreational use of marijuana — Washington and Colorado were first in 2012 — and medical use is legal in 33 states.

Leafly reported in March that there are 211,000 U.S. cannabis jobs and the pot workforce increased by 44 percent last year alone. Longer-term projections have U.S. pot revenues hitting $31.3 billion by 2022.

This past January, Headset raised $12.1 million to help expand its business. Two months later the company inked a key partnership with Deloitte and Nielsen to provide U.S. and Canadian pot manufacturers with a deep-dive into how their customers think about cannabis, how often they use it and which brands they buy, among other data. 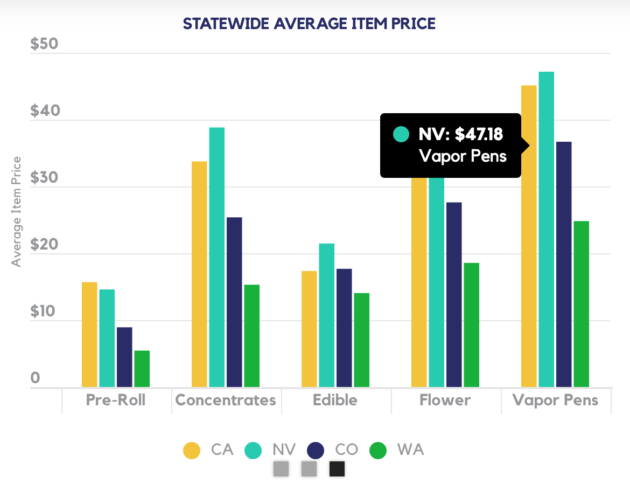 Headset offers three products: The first is a free product for retailers to manage inventory, analyze what products are bought together, and the performance of a given shop’s budtenders. The second is called Bridge, and it allows stores and manufacturers to share data so they can more easily order products and manage inventory. The third is called Insights and provides market data, total sales, breakdowns by any number of categories. Insights uses AI algorithms to mine anonymized store data and state government tracking systems, adjusting for sampling bias.

All of Headset’s data comes from cannabis retailers’ point-of-sale systems. Scott said Headset’s software provides an instant snapshot of the industry, which, he added, “is very different than traditional market data.” Customers’ names and other information aren’t attached to the data, he said.

To get the right data samples, Headset provides its software for free in new markets where cannabis has recently been legalized, Scott said. He said it’s a win-win for both his company and retailers just starting out in those markets, because the data and other resources support those just starting out in the business.

The company also works with computer display companies to provide free displays in cannabis shops as a way to ensure Headset is getting a peek at the data. “If there’s a menu, we’ll power that menu — as long as the retailer approves that connection,” Scott said.

Packed into all that data are insights, which Headset tries to simplify into easily understandable dashboards that its customers can act on quickly. What products are commonly sold together? What brands are cultivating the most loyalty? Which brands are most popular with what age group?

“We see all the transactions as they happen,” Scott said. 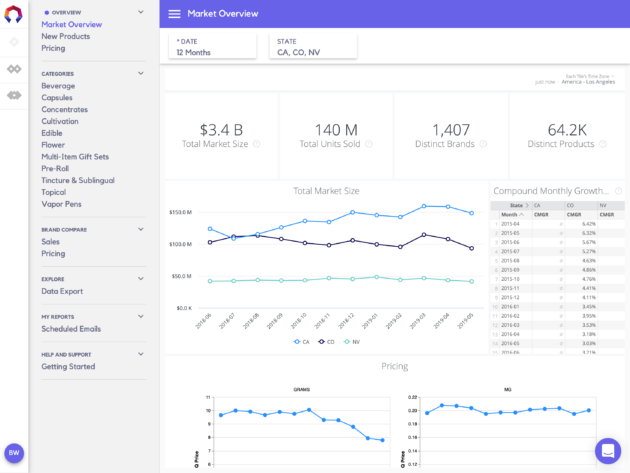 Headsets dashboards track metrics across just about every kind of cannabis product and break the data down by any number of metrics, including market size, units sold and total market share. (Headset photo)

Data is a big deal in every industry, but it’s an especially big deal in the pot business.

To fully grasp why, you have to look back to just a decade ago, when pot was a black market business and the product was grown under basement lights or in secret fields on U.S. Forest Service land, then passed to consumers discretely and in small amounts. In those days, there were no records of how much was grown or sold or which strains people like best. Most pot data came from law enforcement and the Centers for Disease Control — and good luck making marketing decisions with those numbers.

“In this new, emerging industry, there’s not a lot of historical data,” Scott said.

Now that cannabis is legal, pot experts are experimenting in labs with all sorts of confections and tossing them wildly into the market to see what works. But industry observers say the advent of market data is about to bring a dose of calculation and strategy to the marketplace.

“I’m not sure how anyone could observe the forces at work in this industry and not conclude that companies are hungry for consumer data,” said Ben Adlin, a senior editor at Leafly, where he writes extensively about the cannabis business. 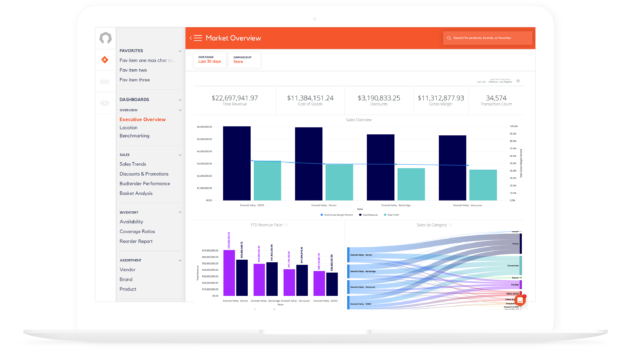 “The industry is saturated with brands looking to differentiate themselves from one another. Many of the best bankrolled newcomers don’t understand the product or the culture,” he said. “Huge companies are making key investments in the space; R&D departments are trying to crack what the next bestselling form factor might be. From what I’ve seen of other industries, I don’t think you do any of those things without trying to gather and analyze market data.”

Headset faces stiff competition as the legal marijuana market moves into a new phase, what some call “cannabis 2.0,” where experienced, data-driven investors are pumping money into an industry that is attracting tech workers from the likes of Microsoft, Apple and Amazon who are leaping into the trade and bringing their data-based marketing skills with them.

Among Headset’s competitors are Akerna, which became the U.S.’s first publicly traded cannabis software company when it listed on the Nasdaq last month and is the product of a merger of two major pot tech players, MJ Freeway and MTech Acquisition. Other competitors include New Frontier, Zefyr and Cannabis Benchmarks.

What’s key to competing in this environment is providing data in real time and getting Headset’s software into enough shops to gather an accurate dataset, Scott said.

Liz Connors, Headset’s director of analytics, noted that people working in pot need “data that’s put together in a way that helps you make decisions and helps you understand how fast market changes are happening.”

You can have these wicked machine learning algorithms. All of a sudden the robots can come in and automate your business.

Connors said Headset’s dashboards take into account a dizzying mix of regulations across states. For example, the Washington State Liquor and Cannabis Board, which regulates the state cannabis business, banned the sale of pot gummy candies last year, fearing kids would mistake them for regular treats. Regulators then quickly reversed themselves, allowing retailers to once again sell the gummies, but with strict rules dictating the candies’ shape and packaging.

Headset’s data takes all of those factors into account and serves up a picture of how regulations impact sales state by state, said Connors, who has worked as a data scientist for more than a decade and has been with Headset since late last year.

“You can have these wicked machine learning algorithms,” she said. “All of a sudden the robots can come in and automate your business.” 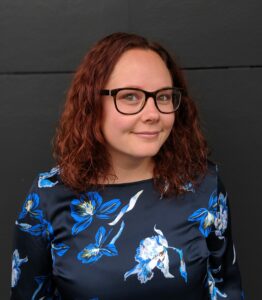 Projections for how fast pot data companies might grow are scarce, but there’s little question among observers that there will be a huge payoff for companies that can provide the right data at the right time. Ancillary pot businesses — those that serve the cannabis trade but never grow or package a plant — are considered one of the industry’s fastest-growing segments.

Roy Bingham, the CEO of BDS Analytics, one of Headset’s competitors, told Investing News he expects demand for cannabis data to grow by 40 to 50 percent each year.

Much like other fast-growing industries in today’s economy, the importance of data is paramount for cannabis businesses. Just this week, outages took out the Washington’s seed-to-sale traceability system, causing lost sales across the state.

Scott declined to say how many customers Headset is serving. He said the company is eyeing a future where pot sales are legal at the federal level and the product is sold in the Costcos and Walmarts of the world. In the meantime, he said, it’s exploring providing software to other industries, such as finance, health and beauty, and alcohol.

Since January, the company has expanded its leadership team, hiring Mike Hayes, formerly of the Seattle predictive hiring company Koru, as senior vice president of sales. Headset also hired Manny Perez as vice president of marketing and Dan Wassel, previously of Seattle cloud company Socrata, as its chief financial officer. The company doubled its headcount last year from 20 to 40.