For years, the Portuguese city of Cantanhede has been known for its wine products and roasted suckling pig, a local specialty. But the city has something new: Portugal’s first medical cannabis production farm.

The cannabis plant produces cannabinoids – chemical compounds used in treating health disorders. Parts of the plant are used to make the drug marijuana as well as a number of products containing the compounds CBD and THC.

Portugal’s sunny weather is ideal for growing cannabis. The weather caught the attention of Brendan Kennedy. He is Chief Executive Officer of the Canadian company Tilray, one of the world’s largest producers of medical cannabis.

Kennedy traveled around Europe from 2015 to 2017 in search of the perfect place for Tilray’s newest production facility. Not only did Portugal have the ideal climate, but Kennedy also liked the country’s agricultural industry and young, educated workforce. 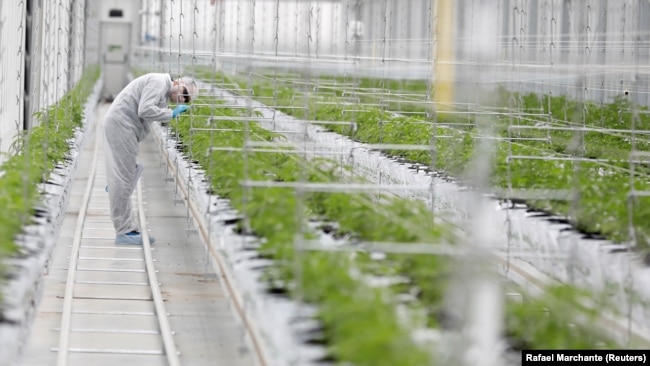 Infarmed is the Portuguese government agency on medicines and health products. In 2017, the agency approved Tilray’s request to start a medical cannabis farm, which covers 2.4 hectares in a biotechnology park outside Cantanhede.

Kennedy opened the facility to visitors for the first time at a ceremony last week.

“Some of our competitors are located in Denmark and northern Germany, where there isn’t that much sun. So we think we can produce a more environmentally-friendly product here,” he told Reuters news agency.

By having the farm in Portugal, Tilray’s products are tax-free within the European Union, or EU. That is the market the company is targeting as other EU governments legalize medical marijuana.

Kennedy noted that Europe is moving toward legalization, and the demand for medical marijuana is growing. He is hopeful that, over the next two years, “We will see every country in Europe legalizing it.”

Last year, Portugal’s parliament approved a bill to legalize marijuana-based medicines. The move followed the legalization of such drugs in countries like Italy, Germany, Canada and parts of the United States. Britain made medical marijuana legal in July 2018.

At the $22.29 million Tilray facility, cannabis is grown indoors and outdoors. The facility also has research laboratories and processing and delivery centers for medical marijuana and products made from cannabinoids.

Tilray supplies medical cannabis products with the compounds CBD and THC to patients in many countries. It also supplies these products through agreements with pharmaceutical companies.

Earlier this year, the European Parliament demanded an EU-wide policy on medical cannabis and financing for scientific research.

“We are at point where almost every doctor around the world recognizes «the medical value of cannabis, Kennedy explained.

The World Health Organization has stated that several studies showed cannabinoids can help patients with cancer and AIDS.

In addition, some drug makers already use chemicals from cannabis. One of them is GW Pharmaceuticals’ Sativex, which is approved for treating symptoms from the disease multiple sclerosis.

Based on information from advisory service Prohibition Partners, the EU cannabis market will be worth 123 billion euros by the year 2028.