Iraq War veteran Stephen Mandile was prescribed 57 medications over 10 years of treatment through the U.S. Department of Veterans Affairs for post-traumatic stress disorder, depression and pain from a spinal cord injury.

Eventually, he tried to kill himself.

He says things got better after he started using medical marijuana when the first Massachusetts dispensary opened in 2015. “I was able to get off of all my other medications and have an improvement in quality of life from making the switch to cannabis,» Mandile said. “It helps me with pain and other issues more than any other medication really could without turning me off completely and not being able to feel anything.”

Mandile, of Uxbridge, is now director of community outreach for a new Massachusetts nonprofit, Alternative Treatment for Veterans. The coalition formed to teach veterans about the medical benefits of marijuana, and to advocate for their increased access to medical marijuana.

“Veterans are an extremely important population because they face a myriad of health conditions after service that are often overlooked and underserved,” said Marion McNabb, CEO of the Cannabis Community Care and Research Network, or C3RN, which is spearheading the effort.

As part of the new effort, different groups are working together to conduct a research study on veterans, create a new education and advocacy nonprofit and run a series of conferences around the state focused on veterans and marijuana use.

“It’s just time we honor those who have served and offer more support at both a state and national policy level that can create systemic change in a sustainable way,” said Ann Brum, founder of Joint Venture and Co., a Boston-based business development agency that is helping coordinate the conferences.

Advocates say while marijuana may help veterans with many ailments they are likely to experience, veterans have a particularly difficult time accessing medical marijuana because it is still illegal under federal law. Many veterans receive health care through the VA, where doctors cannot prescribe medical marijuana and benefits do not cover it. Veterans may lose access to other medications if they test positive for marijuana use.

“We’re trying to combine our efforts to collect some data and some research to change policy at the VA,” Mandile said. 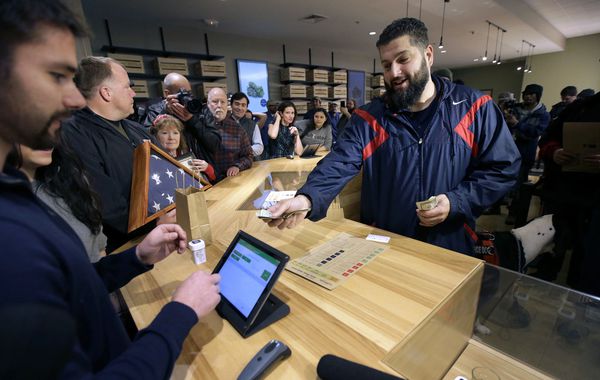 Stephen Mandile, right, an Iraq War veteran from Uxbridge is the first to purchase recreational marijuana at the Cultivate dispensary in Leicester on Nov. 20, the first day of legal sales in Massachusetts.

Mandile said he hopes to help create an environment where a veteran can be open with their primary care doctor about using marijuana without facing stigma. “We want to make it a holistic thing — your doctor knows everything you’re doing so they can help you,” he said. “We don’t want a veteran to not have that option just because of the state they live in.”

The mission of Alternative Treatment for Veterans will be to raise awareness about veterans and marijuana use, support research, and advocate for veterans’ access to marijuana. It is working with C3RN to launch the research study, together with UMass Dartmouth researchers.

For the study, veterans will be asked to complete an anonymous online survey to provide information about their service and medical history, cannabis use and consumption preferences, history of opioid addiction, and barriers in accessing medical marijuana.

The survey is open to all veterans, not only those living in Massachusetts.

McNabb said several dispensaries will give discounts to veterans who take the survey. The veterans will also be invited to attend monthly support groups and participate in clinical cannabis studies.

The research findings will ultimately be used to lobby state and federal officials on marijuana-related issues. McNabb said the goal is to advocate for veterans to have access to medical marijuana, for VA clinicians to prescribe it and for VA benefits to cover it.

Disabled American Veterans Department of Massachusetts, the state chapter of a national organization that has assisted veterans for more than 40 years, is involved with the initiative.

Dan Stack, department adjutant of Disabled American Veterans Department of Massachusetts, said medical marijuana can potentially help veterans suffering from post-traumatic stress disorder and chronic pain. Some of these veterans have been taking opioids to alleviate pain, and some struggle with addiction.

“You have veterans suffering with chronic pain, on opioids, who can no longer be on opioids because of the addictive factor, they look to alternative sources to alleviate their pain,” Stack said.

Stack said he hopes the study can provide better information to veterans and can be used to lobby VA officials.

“There are many studies out there that show medicinal cannabis is a good treatment program for people suffering from stress or chronic pain,” Stack said. “But there’s never been a study that specifically looks at veterans and how they would benefit from this.”

The coalition is also holding a series of six conferences around the state focused on de-stigmatizing marijuana use, reviewing research findings, and increasing education for veterans. Upcoming conferences will be held April 18 in Holyoke and June 20 in Worcester.