Medical marijuana is legal in 33 states as of November 2018. Yet the federal government still insists marijuana has no legal use and is easy to abuse. In the meantime, medical marijuana dispensaries have an increasing array of products available for pain, anxiety, sex and more.

The glass counters and their jars of products in the dispensary resemble an 18th century pharmacy. Many strains for sale have evocative and magical names like Blue Dream, Bubba Kush and Chocolope. But what does it all mean? Are there really differences in the medical qualities of the various strains? Or, are the different strains with the fanciful names all just advertising gimmicks? 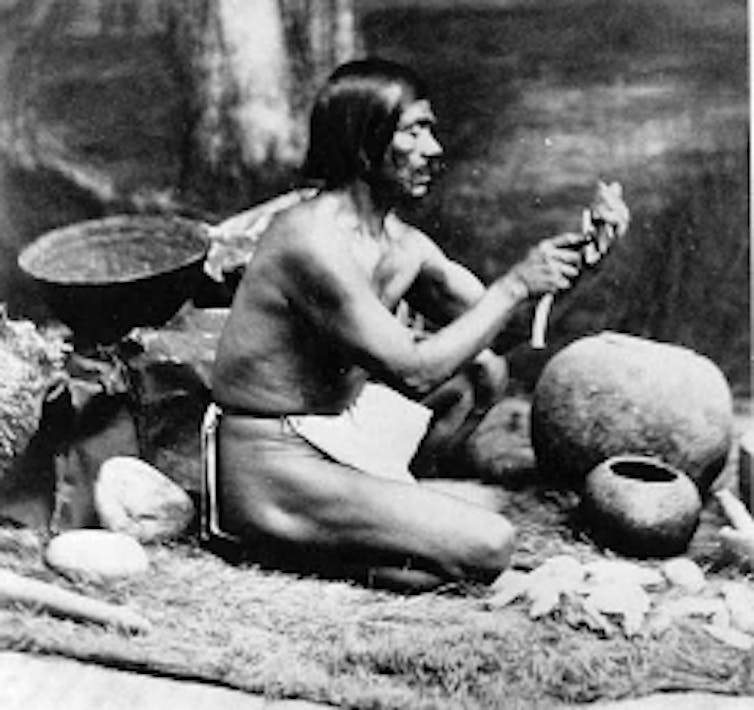 I am a professor in the University of Southern California School of Pharmacy. I have lived in California a long time and remember the Haight-Ashbury Summer of Love. While in graduate school, I worked with professor Alexander Shulgin, the father of designer drugs, who taught me the chemistry of medicinal plants. Afterwards, while a professor at USC, I learned Chumash healing from a Native American Chumash healer for 14 years from 1998 until 2012. She taught me how to make medicines from Californian plants, but not marijuana, which is not native to the U.S. Currently, I am teaching a course in medical marijuana to pharmacy students.

If there is one thing about marijuana that is certain: In small doses it can boost libido in men and women, leading to more sex. But can marijuana really be used for medical conditions?

New research is revealing that marijuana is more than just a source of cannabinoids, chemicals that may bind to cannabinoid receptors in our brains, which are used to get high. The most well-known is tetrahydrocannabinol (THC). Marijuana is a particularly rich source of medicinal compounds that we have only begun to explore. In order to harness the full potential of the compounds in this plant, society needs to overcome misconceptions about marijuana and look at what research clearly says about the medical value. 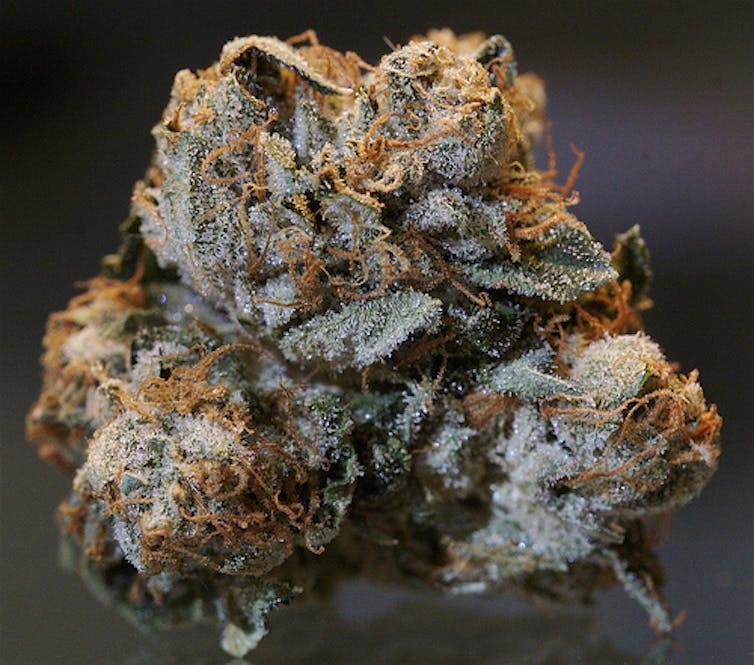 The dried bud of a Kush cannabis plant. Kerouachomsky

The FDA has already made some moves in this direction by approving prescription drugs that come from marijuana including dronabinol, nabilone, nabiximols and cannabidiol. Dronabinol and nabilone are cannabinoids that are used for nausea. Nabiximols – which contain THC, the compound most responsible for marijuana’s high and cannabidiol, which does not induce a high – are used to treat multiple sclerosis. Cannabidiol, or CBD, is also used to treat some types of epilepsy.

Marijuana, originally from the Altai Mountains in Central and East Asia, contains at least 85 cannabinoids and 27 terpenes, fragrant oils that are produced by many herbs and flowers that may be active, drug-like compounds. THC is the cannabinoid everyone wants in order to get high. It is produced from THC acid – which constitutes up to 25 percent of the plant’s dry weight – by smoking or baking any part of the marijuana plant.

THC mimics a naturally occurring neurotransmitter called anandamide that works as a signaling molecule in the brain. Anandamide attaches to proteins in the brain called cannabinoid receptors, which then send signals related to pleasure, memory, thinking, perception and coordination, to name a few. THC works by hijacking these natural cannabinoid receptors, triggering a profound high.

Tetrahydrocannabivarinic acid, another cannabinoid, can constitute up to 10 percent of the dry weight. It is converted to another compound that probably contributes to a high, tetrahydrocannabivarin, when smoked or ingested in baked goods. Potent varieties like Doug’s Varin and Tangie may contain even higher concentrations.

But not all cannabinoids make you high. Cannabidiol, a cannabinoid similar to THC, and its acid are also present in marijuana, especially in certain varieties. But these do not cause euphoria. The cannabidiol molecule interacts with a variety of receptors – including cannabinoid and serotonin receptors and transient receptor potential cation channels (TRP) – to reduce seizures, combat anxiety and produce other effects.

Marijuana also contains several monoterpenoids – small, aromatic molecules – that have a wide range of activities including pain and anxiety relief and that work by inhibiting TRP channels.

Myrcene is the most abundant monoterpenoid, a type or terpene, in marijuana. It can relax muscles. Other terpenes such as pinene, linalool, limonene and the sesquiterpene, beta-caryophyllene are pain relievers, especially when applied directly to the skin as a liniment. Some of these terpenes may add to the high when marijuana is smoked. 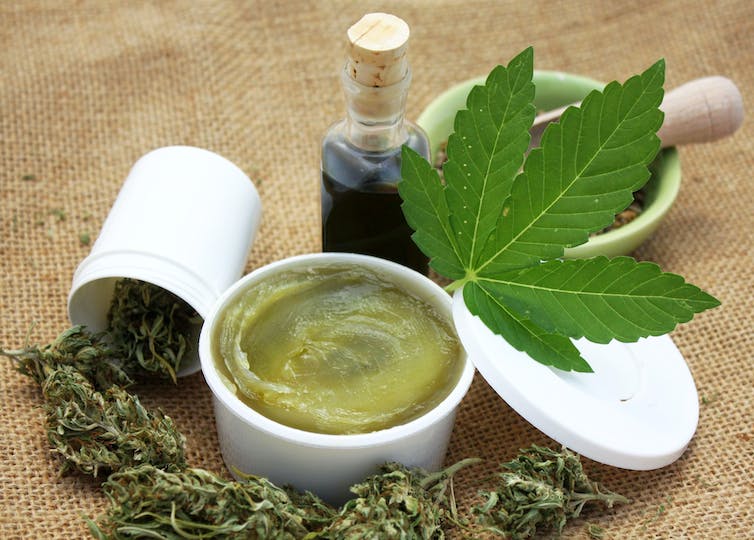 Depending on the medical condition, oils or lotions made from cannabis may be a better choice.

What do all these varieties do?

Many different varieties of marijuana are on the market and are alleged to treat a range of diseases. The FDA has no oversight for these claims, since the FDA does not recognize marijuana as a legal product.

Strains of marijuana are grown that produce more THC than cannadidiol or vice versa. Other varieties have abundant monoterpenoids. How do you know that the strain you choose is legitimate with probable medical benefits? Each strain should have a certificate of analysis that shows you how much of each active compound is present in the product you buy. Many states have a bureau of cannabis control that verifies these certificates of analysis. However, many certificates of analysis do not show the monoterpenoids present in the marijuana. The analysis of monoterpenoids is difficult since they evaporate from the plant material. If you are looking for a strain high in myrcene or linalool, ask for proof. 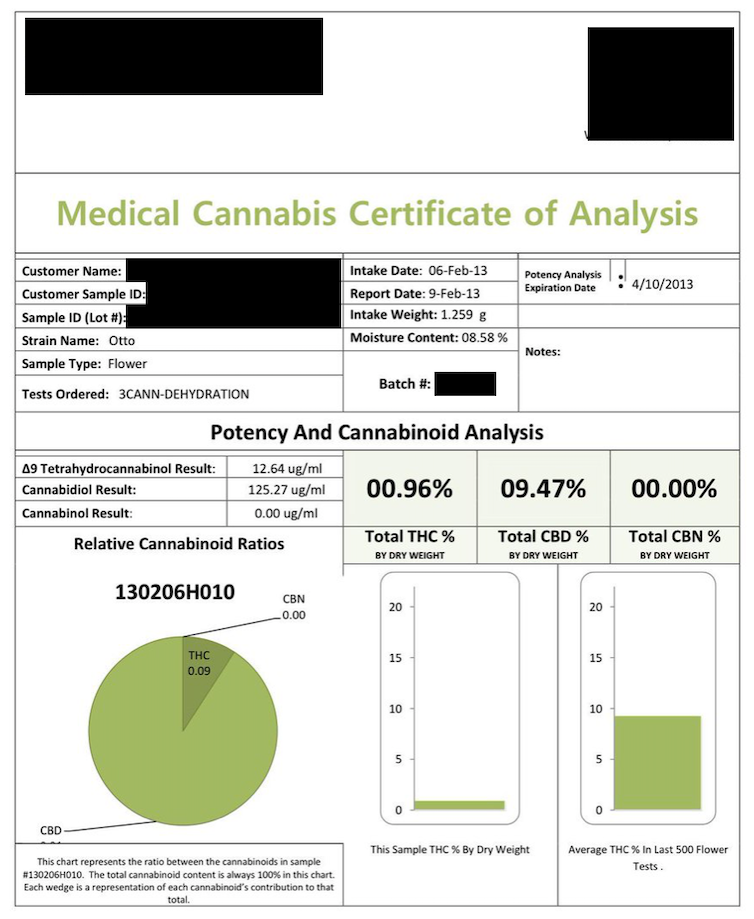 Marijuana can improve several conditions, but it can also make others worse and can have nasty side effects.

As recreational use has become more widespread, marijuana hyperemesis syndrome is becoming more of a problem in our society. Some people vomit uncontrollably after smoking marijuana regularly. It can be treated by rubbing a cream made from capsaicin, from chili peppers, on the abdomen. Capsaicin cream is available in pharmacies.

Also, high THC varieties of marijuana, such as Royal Gorilla and Fat Banana, can cause anxiety and even psychosis in some people.

Researchers have also shown that anxiety can be effectively treated with strains that have more cannabidiol and linalool. It may be best to rub a cannabidiol balm or lotion on your cheeks to relieve anxiety.

For some of these conditions, studies show that eating or topically applying marijuana products rather than smoking is recommended.