Medicinal cannabis: Why has it taken so long to get to patients?

Medicinal cannabis was legalised last year but so far, virtually no-one in the UK has been able to access it.

Now, enough cannabis to treat 30 patients for a month has arrived in the UK from the Netherlands.

Specialist doctors have been able to prescribe cannabis since 1 November – so what has taken so long?

The new law moved cannabis from schedule 1 under the Misuse of Drugs Regulations 2001 – meaning it had no therapeutic value – to schedule 2.

That category is for drugs which are controlled but have a recognised medical use and can be prescribed in certain circumstances.

Cannabis-based medicines can come in the form of whole cannabis flowers, oils or capsules, or a single compound which can be isolated and extracted.

The two main active ingredients in cannabis are cannabidiol (CBD) and tetrahydrocannabinol (THC) but a cannabis plant will contain hundreds of different compounds.

Medicinal cannabis is currently unlicensed so doctors can prescribe it only if a patient has a need that can’t be met by licensed medicines.

Under the new rule, GPs are not allowed to prescribe cannabis-derived medicines. It has to be a specialist consultant, for example in neurology or paediatrics.

They don’t usually write prescriptions for medication, let alone go through a process of having those prescriptions specially approved and applying for licences.

Even getting the right prescription pads has been a challenge according to Hari Guliani at Grow Biotech, a consultancy which has worked with both doctors and importers.​

Prescribing cannabis is new to UK doctors and so it may take a while before they begin doing so, says Dr David McDowell, the pain specialist who prescribed cannabis for the four patients receiving their medicines this week.

He described the current process as «tortuous».

Doctors have to get their prescriptions for cannabis approved by the Medicines and Healthcare products Regulatory Agency (MHRA).

That prescription is then valid for 28 days and, at the moment, doctors can only prescribe a month’s worth at a time.

One of Dr McDowell’s patients, who is set to receive his first supply of medical cannabis, suffers from Crohn’s – a painful inflammatory bowel disease. He said he had been prescribed opiates in the past, which, he said, had made his condition worse.

«It’s a hard thing to do to yourself to put up with becoming addicted to opioids or putting up with the vomiting and nausea that come with immune-suppressing drugs,» he said.

But, he says, the price for cannabis – £695 for one month’s supply- «takes the edge off the good news», adding that he didn’t believe it would be sustainable for him in the long term.

All the patients receiving cannabis this week are doing so privately.

NHS England said that cannabis-based products would be prescribed only where there was «clear published evidence of benefit» that couldn’t be achieved by a licensed medicine.

It said that where necessary, NHS Trusts could meet the cost but, «the current position is that no cannabis-based products for medicinal use are routinely commissioned.»

In October 2019, the National Institute for Health and Care Excellence (NICE) plans to publish guidelines concerning the medication, and the NHS will then use this to decide whether it will eventually fund the drug routinely for some patients.

At the beginning of December, Carly Barton is thought to have become the first person to be given a prescription for cannabis but wasn’t able to actually receive the drug because none had been imported.

She told the BBC last year that she had been buying cannabis «on the black market» instead of taking very strong opiates including fentanyl which she had been prescribed for pain. 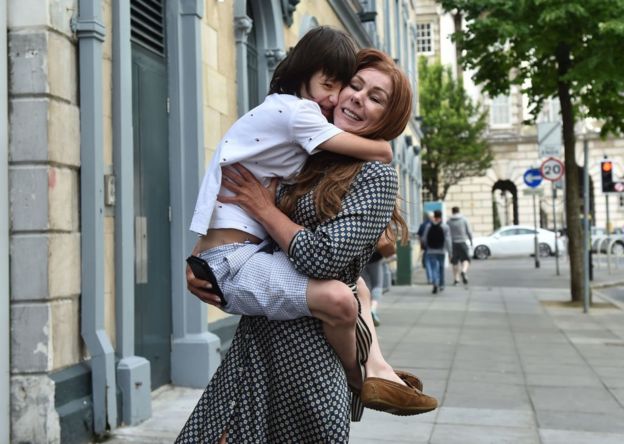 Image captionCharlotte Caldwell campaigned for medical cannabis to be made available for her son Billy, who suffers from severe epilepsy

Last month, Charlotte Caldwell, whose son has a rare form of epilepsy and became the centre of a campaign to legalise the drug for medicinal purposes, told the Times she had been able to pick up a dose of cannabis.

It’s understood that an individual supply was flown in from Canada – but this week is the first time a bigger stock of the drug has been imported.

Other conditions cannabis might be prescribed for include multiple sclerosis and cancer.

At every stage of the process, getting cannabis-based medicines to patients is very tightly regulated, adding to the delay.

Doctors need to apply to the Home Office for an import licence to bring in the cannabis from overseas.

The first batch of legal cannabis has been shipped into the UK in the form of whole flowers, which contain more than one active pharmaceutical ingredient.

This also makes it more complicated to get approval than importing a single compound like, say, morphine.

While morphine is also a controlled substance, it has a well-established medical use, meaning processes are in place to import and regulate it.

This batch coming from the Netherlands has been grown at a specially regulated site for cannabis for medical purposes and the export has to be approved by the Dutch government.

The whole process can take up to 28 days, so by the time it’s completed, the prescription may have expired.

These delays are why companies involved in the process of importing medical cannabis say its important to bring in a bulk amount.

The bureaucratic hurdles are all there for patients’ safety, says Mr Guliani at Grow Biotech.

But bringing cannabis into the country in larger amounts can mitigate these delays, meaning when patients’ supplies run out there’s stock available and they don’t have to have a gap in their treatment.